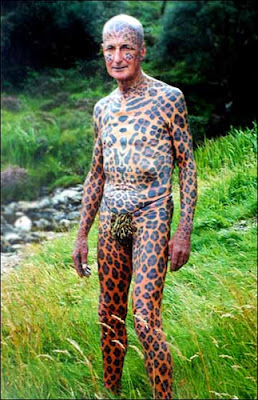 Whether he’s mad or not, 67yr old tom leppard seems extremely happy living in a hand-built home on the isle of skye, 99% of his body tattooed with leopard print. he spends his days reading, scampering about the place on all fours like a leopard and staying away from the hustle and bustle of modern society. for a man who looks like john locke after an intense mud fight he actually seems pretty pleasant… 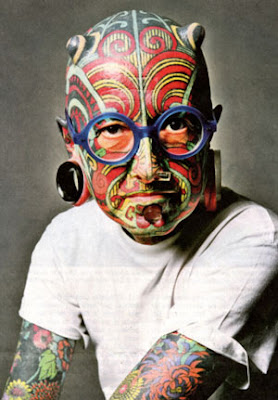 Etienne Dumont is an art & culture critic for a newspaper in geneva who just happens to be covered head to toe in some of the most vibrant tattoos i’ve ever seen. he also has silicon implants under the skin which give the horned appearance, 2.7 inch rings in each earlobe and plexiglass piercings through the nose and under his bottom lip. the best part has to be the blue rimmed glasses though, a perfect addition to an incredible look. 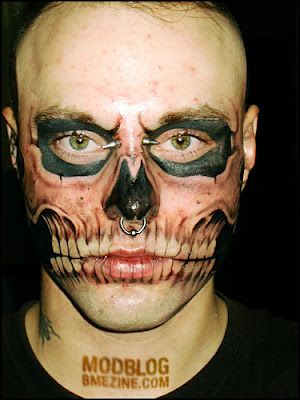 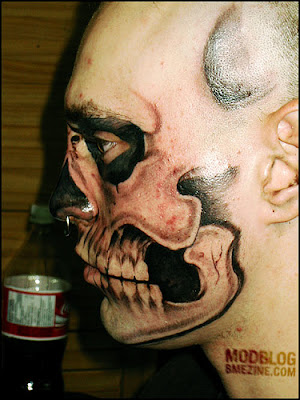 without doubt the scariest human head i will ever see in my lifetime. there isn’t much information about mr genest himself on the internet (would you approach him for an interview?) but we do know the tattoo was crafted by the chaps at ‘derm fx tattoo‘ in montreal. job well done guys. 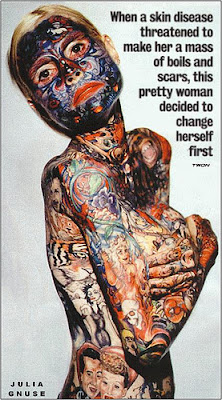 Julia Gnuse (aka the illustrated lady) was born with a condition called porphyria which causes her skin to blister regularly and ultimately scar. in order to cover this up she started getting tattoos applied over the affected areas - after 10 years she was covered in the bastards and is now the most tattooed woman in the world. 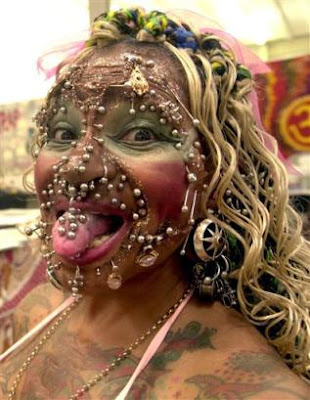 In total, brazilian Elaine Davidson has the most number of tattoos and over 2500 piercings on her body, both internally and externally, approximately 500 just around the genitals. the total extra weight she carries due to this obsession comes to around 3kg and she is thankfully the most pierced person in the world. now living in edinburgh she claims to be too scared to go home to brazil due to the attention she’d attract possibly resulting in some kind of attack. 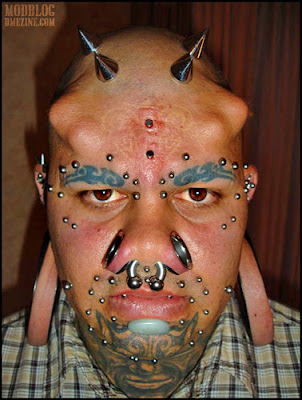 kala kawai has 67 piercings and 75 % of his body is tattooed so it’s a good job he chose a career in body modification, running his own studio in hawaii. he has stretched the holes in his earlobes to 4 inches, inserted various silicon implants on his head, can screw metal spikes into the top of his skull, has a split tongue and generally looks extremely frightening. also worth bearing in mind is that he split his own tongue using dental floss and did all his own piercings. 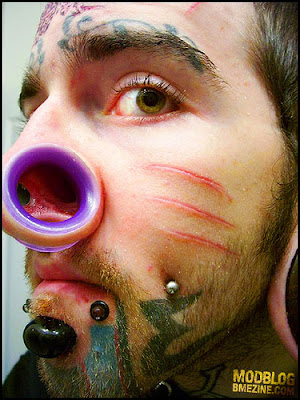 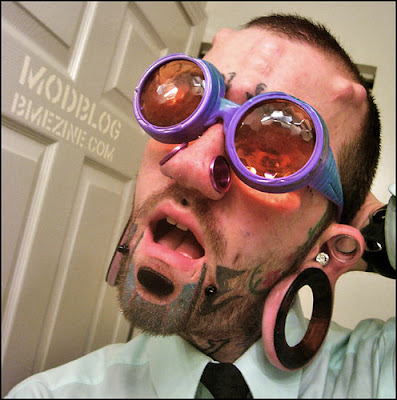 With a name like ‘unstoppable’ you’d be stupid to give up on the modifications after a couple of earrings. this guy has surely the largest nostrils in the western world (if you look closely i’m almost certain you can see his brain) plus a huge array of other ‘body mods’ to his name including scars cut into his cheeks and forehead, a split tongue, domes implanted under the skin of his forehead and many many more. 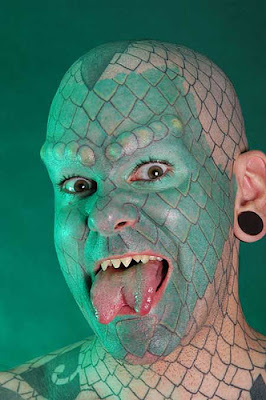 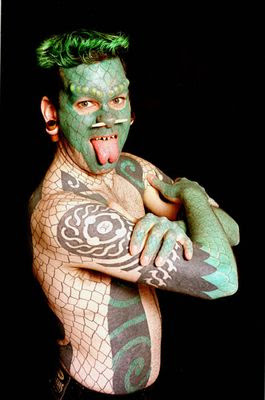 Born eric sprague in 1972, the lizardman was one of the first people to have a split tongue and in some circles is seen to be wholly responsible for the recent popularity of this particular modification. pretty much all of his body is covered in green scale tattoos, his teeth have been filed down to sharp points and he has numerous silicon teflon implants in his head.
Below is an interview with the lizardman - check out the forked tongue action. 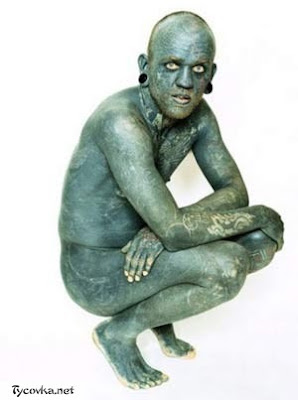 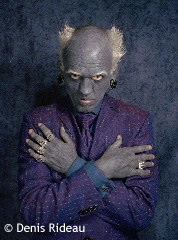 it goes without saying that this guy is officially the most tattooed person in the world - he swiped the record from our friend tom leppard at #10 in 2006. he has tattoos everywhere, some of the stranger places including his eyelids, inside his ears and even on his gums. it’s apparently a work in progress and has so far included the efforts of hundreds of tattoo artists and over 1,000 hrs of pain. 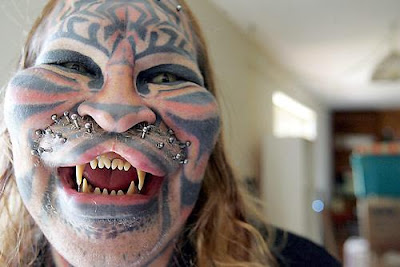 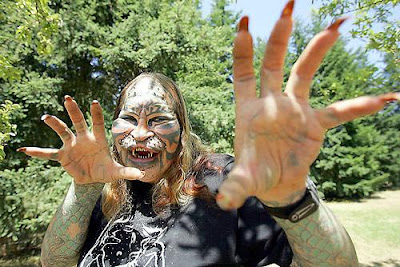 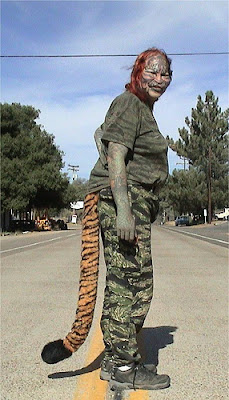 First place was always gonna go to 44 yr old dennis avner, aka stalking cat. i remember a few years ago watching a documentary about him and nearly crying when his face appeared for the first time, my brain simply wasn’t able to process the sight. he looks like a cross between jocelyn wildenstein and the beast from the old beauty & the beast tv programme and he’s gone the whole hog in terms of body modification: tattoos, silicon implants on his face, pointed teeth, surgically pointed ears, piercings, attachable whiskers, claws, a bifurcated top lip and even an animatronic tiger’s tail. he says he’s been going through these procedures for the past 20 years because he grew up in a native american tribe and his belief in their customs drove him to transform into his totem animal - the tiger.