May 23, 2007
A 24-year-old Tata Consultancy Services engineer was found dead on Monday morning in a hotel room in Andheri, where she had checked in with a male companion on Saturday.

Koushambi Layek, a systems consultant with TCS, was found dead in room number 202 of Hotel Sun-n-Sheel in Andheri (East) when the hotel staff opened the door with a duplicate key after their repeated calls on the intercom went unanswered. She was found lying on the bed soaked in blood with two bullets wounds.

Koushambi had checked into the hotel at 7 am on Saturday, May 12 with a man who signed as Manish Thakur in the guest register.

On Monday, the hotel staff called up the room at around noon and when nobody responded despite repeated attempts, they opened the door with a duplicate key.

"Koushambi was shot twice from point blank range - one bullet lodged in her head and the other in her neck. We have recovered her TCS identity card, a railway pass and a chopper from the spot," said Deputy Commissioner Naik Navre.

Nobody in the hotel heard the gun shots and the police suspect that Koushambi was gagged before being shot. The police are now in the process of drawing a sketch of the man with whom Koushambi had checked in with the help of the descriptions provided by the hotel staff.

According to the police, the couple had been to other hotels also in the vicinity too the past two months and each time the room was booked in Manish Thakur’s name who gave a Kolkata address.

Koushambi, a native of Dumka in Chhatisgarh, shared an apartment with two TCS girls in Regalia Co-operative Housing Society in Borivli. Before moving in there, she was staying with four of her TCS colleagues — Shilpa Gangarde, Megha Acharya, Nalini Gupta and Nidhi Jain — at Sai Shraddha Housing Society at Ashokvan.

Sandeep Narvankar, secretary of Sai Shraddha Housing Society, said they never had any complaints against Koushambi from any of the residents. Suresh Singh, a watchman, said he had not seen Koushambi with any boy in the building. “She never came home late and was never accompanied by anyone,” he added.

Interestingly, there is a Manish Thakur listed among Koushambi’s friends on Orkut. And this what she has to say about him: “Well, what to say about this sportive guy...he is really caring and loving guy...He is amazing, awesome and friendly. I need not describe him as anyone close to him must surely be aware of his abilities. He is an all-rounder..Be it in the field of studies, sports or music. He is a champ...Don’t u think so???”

Manish Thakur’s profile on Orkut opens with: “Hi, this is Manish here. hope u will find it interesting with me. all the best. only good friends are allowed, thankx...”

He gives his age as 28 and says he is on Orkut for friends, activity partners and business networking. In the space for residential address, he mentions two cities -- Kolkata and Kochi.

Additional Commissioner of Police Bipin Bihari said: “Police has managed to get contact numbers of Manish Thakur and the numbers are being tracked to reach the suspect. We are hopeful to get hold of him soon, although we are not sure if he entered his real name in the register.”

A Team of Mumbai policemen are in Goa to take custody of Navy engineer Manish Thakur, who was held by the Navy Police.

Thakur, who went missing after the killing and is the “prime suspect”, “is married but still started a relationship with Koushambi. He told her family that he would marry her after divorcing his wife,” Deputy Commissioner of Police (Zone X) JJ Naiknavare told Newsline after taking statements from Layek’s mother, brother Sounak — who have come to Mumbai — and colleagues.

"Layek’s mother was against the relationship because Thakur was married,” added Additional Commissioner of Police (Western Region) Bipin Bihari. Naiknavare said Thakur and Layek were seeing each other since 2005. They first met in Trivandrum.

The DCP said Layek — who was an assistant systems engineer with TCS — may have pressurised Thakur to divorce his wife and marry her. “But we do not say this could be the motive behind the murder as we are still to question Thakur,” said Naiknavare.

Alok Mishra, the Defence Public Relations Officer, Maharashtra and Goa, said: “Yes, Thakur was held in Goa on Tuesday night and will be handed over to the police after the required procedure.”

According to the police, the Navy authorities have asked them to show the evidence they have against Thakur. The police expect that Thakur would be handed over to them by Wednesday evening and would be brought to Mumbai by Thursday.

The police say Layek’s family had never met Thakur, but Sounak had spoken to him a few months back.

The police have learnt that Thakur’s wife and his child are in Kolkata. He was based in Kochi, working for the Navy as an aircraft maintenance engineer in the senior sailor’s position.

“The murder does not seem to have been committed in the spur of a moment, but is a well planned one, as the accused had two weapons with him,” said Senior Police Inspector with the MIDC police station Pradeep Sonawane — a chopper was found in the room and a live bullet apparently from the pistol used to shoot her.

The police say Layek’s mobile phone is missing, they suspect that Thakur may have taken it with him. However, they have accessed her cell phone records and found that she and Thakur used to stay in touch through phone calls and SMSes.

Captain Nambiar, Navy spokesperson in Kochi, told Newsline today: “Thakur was based at Kochi till February 10 but was then sent for technical training to Goa. This is a mandatory three-month course for sailors.”

When asked if Thakur could have taken a weapon from the Navy’s arms room, Nambiar said: “The Navy arms room would have weapons like 9 mm or .38 caliber pistols, but it is very difficult to smuggle them out.” The police suspect that the live bullet found in room number 202 of Hotel Sun N Sheel — where Layek’s body was found — could have come from a 9 mm or .38 caliber weapon.

“We think the weapon used in the murder was a .38 bore pistol, which is a prohibited bore meant only for Defence and police personnel. We suspect Thakur may have used his service weapon, but are yet to confirm this with Naval authorities,” said Bihari.

According to the preliminary post-mortem report, which the police received today, Layek suffered brain haemorrhage because of the wounds in the head when she was shot.

The entire story can be found at the following popular Mumbai Newspaper - Mumbai Mirror.

The Orkut Profile of the Murderer - Manish Thakur. 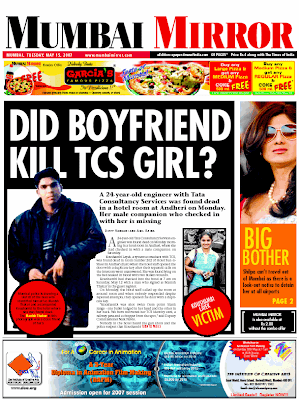