Indian Media:: I hate it.

By the time u guys read this news, the body of Major Manish Pitambare, who was shot dead at Anantnag, would have been cremated with full military honors. 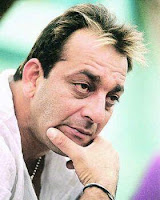 On Tuesday, this news swept across all the news channels 'Sanjay Dutt relieved by court'. 'Sirf Munna not a bhai' '13 saal ka vanvaas khatam' 'although found guilty for possession of armory, Sanjay can breath sigh of relief as all the TADA charges against him are withdrawn' Then many personalities like Salman Khan said 'He is a good person. We knew he will come out clean'. Mr Big B said "Dutt's family and our family have relations for years he's a good kid. He is like elder brother to Abhishek". His sister Priya Dutt said "we can sleep well tonight. It's a great relief"
Sanjay Dutt

In other news, Parliament was mad at Indian team for performing bad; Greg Chappell said something; Shah Rukh Khan replaces Amitabh in KBC and other such stuff. But most of the emphasis was given on Sanjay Dutt's "phoenix like" comeback from the ashes of terrorist charges. Surfing through the channels, one news on BBC startled me. It read "Hisbul Mujahidin's most wanted terrorist 'Sohel Faisal' killed in Anantnag , India . Indian Major leading the operation lost his life in the process. Four others are injured.

It was past midnight , I started visiting the stupid Indian channels, but Sanjay Dutt was still ruling. They were telling how Sanjay pleaded to the court saying 'I'm the sole bread earner for my family', 'I have a daughter who is studying in US' and so on. Then they showed how Sanjay was not wearing his lucky blue shirt while he was hearing the verdict and also how he went to every temple and prayed for the last few months. A suspect in Mumbai bomb blasts, convicted under armory act...was being transformed into a hero.

Sure Sanjay Dutt has a daughter; Sure he did not do any terrorist activity. Possessing an AK47 is considered too elementary in terrorist community and also one who possesses an AK47 has a right to possess a pistol so that again is not such a big crime; Sure Sanjay Dutt went to all the temples;
Sure he did a lot of Gandhigiri but then........ ..

Major Manish H Pitambare got the information from his sources about the terrorists' whereabouts. Wasting no time he attacked the camp, killed Hisbul Mujahidin's supremo and in the process lost his life to the bullets fired from an AK47. He is survived by a wife and daughter (just like Sanjay Dutt) who's only 18 months old.

Major Manish never said 'I have a daughter' before he took the decision to attack the terrorists in the darkest of nights. He never thought about having a family and he being the bread earner. No news channel covered this since they were too busy hyping a former drug addict, a suspect who's linked to bomb blasts which killed hundreds. Their aim was to show how he defied the TADA charges and they were so successful that his conviction in possession of armory had no meaning. They also concluded that his parents in heaven must be happy and proud of him.

Parents of Major Manish are still living and they have to live rest of their lives without their beloved son. His daughter won't ever see her daddy again.
Major Manish Pitambare

So guys what do you think.. Is our news channel a mere entertainment portal or do they give some solid news??