September 19, 2007
Yuvraj belted fast bowler Stuart Broad for 36 runs in the 19th over to become the first player to achieve the mark in the shortest form of cricket.

Yuvraj's fireworks boosted India to a total of 218 for four from their 20 overs.

On a record breaking day, he also scored the fastest half century in Twenty20, needing just 12 balls. Yuvraj was eventually dismissed for 58, with Paul Collingwood taking the catch off an Andrew Flintoff delivery. Yuvraj hit three fours and seven sixes during his entertaining knock.

The 25-year-old became the fourth man to complete the feat at elite level.

ndia's Ravi Shastri and West Indian Garfield Sobers had achieved the record in first class cricket, while South African Herschelle Gibbs reached the landmark at the 50-over World Cup earlier this year.

18.1 Broad to Yuvraj Singh, SIX, that's out the ground, super shot over cow corner and it just kept going up.

18.2 Broad to Yuvraj Singh, SIX, now that really is sweet, no more than a dismissive flick off his legs, swatting a fly, and the ball arcs deep into the crowd beyond backward square leg. The dodgy TV measurement says that's 111 yards but as it landed outside the ground how do they know? They guess that's how.

18.3 Broad to Yuvraj Singh, SIX, he's hitting them everywhere, he steps to leg and smashes the ball over extra cover and it keeps on traveling. The fireworks start on top of the scoreboard and they've been going off in the middle for some time. 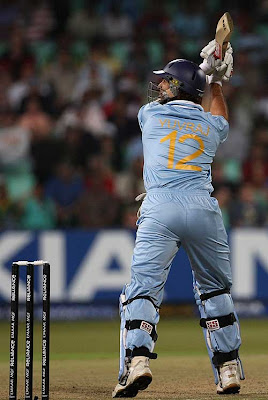 18.4 Broad to Yuvraj Singh, SIX, Shiver me timbers! Broad goes round the wicket, bowls a filthy wide full toss and Yuvraj steers it over backward point and it clears the rope again. 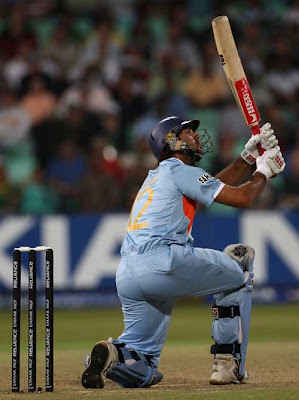 18.5 Broad to Yuvraj Singh, SIX, down on one knee and larruped over midwicket, that one was more nine iron, it went into the night sky and dropped with a thud in the jubilant crowd. England have a team meeting.
Broad looks quizzical and miserable. Can he, can Yuvraj do it. Broad looks like a man who knows he is about to be mauled again. 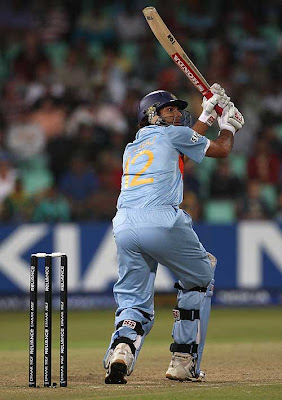 18.6 Broad to Yuvraj Singh, SIX, and he has, Yuvraj leans back and smacks that over wide mid-on. It was the maximum from the moment it left that bat and the crowd was roaring as it flew.
Articles News