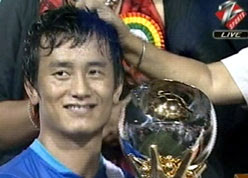 New Delhi: India's footballers have scripted a memorable chapter in their history by winning the Nehru Cup. Their opponents in the final Syria, were ranked 398 places above them in the FIFA rankings but on the day India were just too good.

A warm summer evening in the Capital and a full house was in attendance for India's biggest football match in recent memory.

The early script went to plan as Syria were clearly rattled by an energetic Indian forward line. A push on captain Baichung Bhutia should have earned a red card; instead they were lucky to escape with just yellow.

Minutes later, India thought they were ahead with Baichung finding the back of the net but only to find the off-side flag up.

Syria responded well with a wave of attacks of their own, only to be denied by an alert Indian defence and goalkeeper Subrata Pal.

But just as the first half wound down, India struck, with N P Pradeep unleashing a left-foot scorcher to spark off wild celebrations.

The drama for the half wasn't over though. Syrian defender Wael Ayan was sent off in the sixth minute of injury time for a foul on Sur Kumar. The referee had a tough time controlling the melee.

India went into the break with the stadium buzzing and several familiar faces in the stands urging them on for the final flourish.

After an agonising six minutes of injury time, the final whistle sparked off wild celebrations. India had won their first major international tournament in five years and their first Nehru Cup in 13 attempts.

The Indian football's best came at the Olympics which was way back in 1956 when they were placed 4th. The team claimed the gold twice and the bronze once in the Asian Games. Four years later they took the gold in the Asia Cup and the silver in 1974.

They are three-time winners at the SAF Games. And won the LG Cup in Hanoi in 2002.