Did Snapchat CEO's comment on India being a poor country?

April 16, 2017
I would like to get the facts straight over here before we get more offended reading the headlines of all the major Indian bulletins.

We as an Indian have few options here:

I have got lots of backlash for defending this. So i would like to add some more facts.
Approximately 23% of people in our country is below poverty line.
Moreover, India's per capita income (nominal) was $1,570 in 2013, ranked at 112th out of 164 countries by the World Bank, while its per capita income on purchasing power parity (PPP) basis was US$5,350, and ranked 106th. Other estimates for per capita Gross National Income and Gross Domestic Product vary by source.
Up to 95% of India still qualifies as poor or low-income, the vast majority of India's 1.2 billion citizens. For the globe, the equivalent proportion is 71%. As far as middle-income Indians go, only 2% of the country actually falls into this zone, compared to 13% of the globe, which is itself a disappointing number. 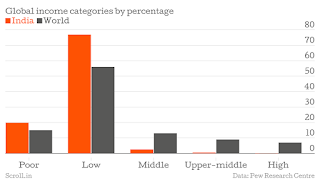