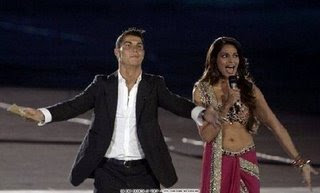 With invitation going to our bong babe Bips.. It was somewhat clear that TAJ would do figure in the final list of the Seven Wonders.
Congrats to all my fellow countrymen on this achievement who took this issue of shortlisting Taj as a matter of ijjat and started an advertising campaign of the scale never seen before. From orkut scrapes to mails in inbox. The issue reached the most of internet surfing educated class of India and they truely followed the spirit of TAJ.
But what happened at the ceremony was the eighth wonder in itself. The real and devouring feast for eyes was the scene of Bipasha with portugal and man u star. On top of it was the lip lock between them. No girl from our country would miss such a chance if it comes there way. The bong fantasies for futbol must have added to the craze of Bipasha. So dont look at the matter as a kiss in some relationship or something but a kiss from the fan to football star..
But whatever.. still i would say!!Oooh!! unlucky looser John GOAL Abraham. Flop movie and a flop relationship!!!!
News